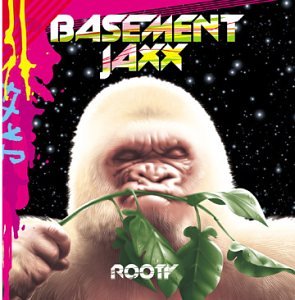 Since Simon Radcliffe and Felix Burton of Basement Jaxx released the unbelievable Remedy in 1999, house music has experienced a slight identity crisis. But even as trance and Fatboy Slim-style big beat saturate the dance floor, the primal, funky soul of true house that the Jaxx duo know and love clearly reverberates beneath it all. With Rooty, Radcliffe and Burton finish the job they started on Remedy by listening to their instincts, stripping away the gloss, taking some creative risks, and coming up with some of the rawest grooves in recent memory. The first track and single "Romeo" doesn't waste any time, parlaying an irresistible hook and a relentlessly up vibe into the most danceable three and a half minutes of 2001. Frankie Knuckles-era Chicago house and War's deep Latin funk are audible throughout, along with an adventurous production sense; "SFM" packs in a wild kaleidoscope of howls and cross-rhythms while slinking along and rubbing itself on the furniture like a cat in heat. Still, given the level of creative license at work here, the record sometimes misses the mark. Songs like "I Want U" reach for progressive funk, but forget the low bass end that can give a silly, airy song some gravity. But more often that not, the band's decision to eschew beats in favor of dirtier, sexier means of rhythmic expressions pays off. Witness the fat bass line at work in "Get Me Off," as a breathy tease of a lead vocal turns into an outright come-on. Somehow both relentlessly modern and a throwback to simpler, funkier times, Rooty is an effective way to jog the memory should you have forgotten the egg that came before the trance chicken. --Matthew Cooke

If 1998's Remedy innocently shined a light into the dank back room of daring creativity that house once occupied, then Basement Jaxx's infectious follow-up should serve as the next chapter in their brazen, genre-disrupting saga. Though it's hardly a mere continuum of their tough, dirty sound (standard issue on Remedy and Atlantic Jaxx). Instead of picking up where the sonic carnival of Remedy left off, Rooty drifts into a hall of mirrors, where Felix Buxton and Simon Ratcliffe entertain themselves with carefree new twists on Ramp;B, pop and house. So if you can shake off the initial shock of Kele Le Roc's sassy vocal on the album's opener "Romeo" or the guilty Mentos pleasure of "Jus 1 Kiss," you just might be hooked.

Perhaps believing there's safety in numbers, Rooty features a few notable guest "vocalists" like Derrick Carter (on "Freakalude"), Junior Sanchez and Erick Morillo (both on "Where's Your Head At?"). Supporting cast aside, though, it's the lyrics that once again shine through, distancing the Basement Jaxx from the muted track-churning legions of house music producers. As with Remedy, signature tales of wilted romance and tormenting vixens are deftly woven into a contagious mix. What's different here is the utter lack of restraint and rhythmic playfulness that oozes from most of the disc.

Of course, a daringly fun record like this will attract haters, especially with lines like, "She's a funky feline machine/Crazy cat inside your dream" trading places with "You're neurotic like a yo-yo/U used to be my Romeo." But if that bothers you, you're probably missing the point: The Basement Jaxx don't want you posturing along the wall with the tough guys. Theirs is a world where being cool is the last thing on the list, having been completely overshadowed by a rambunctious party full of noise-making revelers like the ones found at their Brixton club night that gave the album its name. The Jaxx truly believe that your ass will follow your newly freed mind.

For longtime fans, there are the familiar rallying points. "Breakaway" is as turbo-charged as anything the Jaxx have done. It's a sexy cut-and-paste burner that the album could use a few more moments of. And the punkish "Where's Your Head At?" is this album's "Yo Yo," its flanger effects and Gary Numan-sampling guitar dredge reminiscent of that weird dream you had where the Beastie Boys sang over a DJ Sneak set. I disengage at "Do Your Thing" though, a goofy mess that sounds like a Jackson 5 reunion show. What you can't forget is that these songs are best served with little regard to composure, context or rules. And they take some warming up to. If you're not prepared to lift your hands and let a smile displace your cool exterior, you may want to avoid this 43-minute temptation. However, if you've been hiding a silly grin behind a falsely tepid demeanor, it's likely that Rooty will cut it loose instantly and lead you straight onto the dance floor.

On Icy Veins, you will find news and guides about your favorite Blizzard games: